The Royal National Lifeboat Institution is a sea-rescue charity facing an unexpected crisis: donors were getting older; and the youth had a lower awareness of it than any other British charity. So, how could they win their hearts? Research revealed that 1.The younger you are when you become aware of a charity, the more likely you are to donate when you reach an older age; 2.Among the youth’s top three concerns is the way the media stereotypes them as a dumbed-down game-numbed knife-wielding generation; 3. Most live inland, and don’t think they’ll ever need saving at sea. So they sought a higher purpose than sea rescue ... and discovered their relevance not in their service, but their values. Values that are part of the ‘character’ of an island nation; values the media accuses their generation of betraying and values they aspire to now more than ever as they take on the mantle of a world ravaged by war, recession and environment destruction. It started as a campaign but has become a movement - by the youth, for the youth and about the youth. One committed to rewriting the way the media stereotypes them and one that gives them a platform to voice their values, views and vision through a medium they’ve made their own. How? They sent 12 subversive ‘mystery packages’ to Britain’s 12 most popular bloggers to open live on their blogs, challenging their viewers to post videos and texts about who they really are. They did ... in startling numbers. And as intrigue built, clamour to reveal their identities intensified. They responded by inviting the bloggers to a ‘Gathering’ at our HQ to find out. After all, who better to champion the youth than a brand with the ultimate reason to believe in them? After all, they have 470 volunteers between 16 and 22 willing to risk their lives every day to save the lives of others. They reached bloggers in the ‘real world’ by searching their blogs for personal data, so one received a pack at his theatre group, another at his gig, another from a return address when we bought something off eBay: • 7 of the 12 bloggers opened their DM live, challenged their viewers, attended their ‘Gathering’ at HQ and helped turn their campaign into a movement. • Their films attracted nearly 1,000,000 views, 4,000 texts, 150 videos; featured twice by YouTube editors and were ranked ‘Top 10 most-viewed this month’ in UK/France/Germany/Poland/Russia/Australia/Canada; They talked to 12 people ... and reached 11% of 5-20 year olds in Britain. Silver Cannes Lions Media Winner. 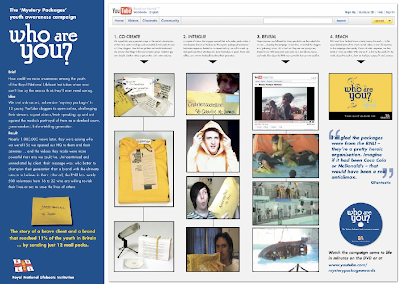 Posted by Marc van Wageningen at 11:57 AM