Many Australian beer brands also offer their product in a larger-size “longneck” bottle. To grow their market and give their current customers this option, Tooheys Extra Dry (TED) wanted to launch their own longneck beer bottle – the TED 696ml. Their aim was to: 1) Launch the product (TED 696ml bottle). 2) Reach influencers - it's important for Tooheys Extra Dry (TED) to continue to be a creative, edgy brand. 3) Create interaction - they wanted to get people deeply involved with the brand, creating an ongoing dialogue. Ironically, the brown paper bag that all longneck bottles are sold in, covers the branding of the product inside, yet it has never before been used as an advertising medium. In Australia, longneck beer bottles are always sold in brown paper bags. Therefore if they could own this bag, they would own the category. So they launched the TED696 Project – a collaboration between TED and some of the world's best street artists to design a brown bag using the theme of ‘696’. They then opened the competition to the wider public. In the first eight weeks, over 500,000 longneck bottles of TED were sold representing $9 in sales for every $1 invested. The website received unique visits from 104 different countries, with each person spending an average of 9.5 minutes at the site. During the 5-week competition period, we received a cutting edge design every 84 minutes. MTV held a gala exhibition evening to announce the winning design. The exhibition is now touring nationally. The bag design competition was so successful that it is now an ongoing project, with submissions being printed and distributed throughout liquor stores around the entire country. Gold, Silver, Bronze Cannes Lions Direct Winner. Gold, Silver Cannes Lions Promo Winner & Bronze Cannes Lions Media Winner. 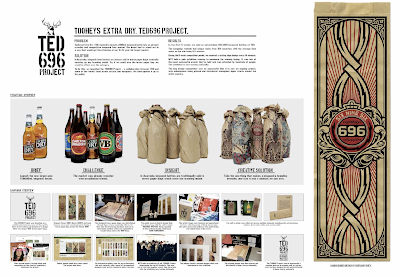 Posted by Marc van Wageningen at 11:05 AM