In the Dutch reality show 'The Phone', anyone can be surprised by a mobile phone anytime, anywhere. Pick it up, and you'll suddenly find yourself in a live reality TV game to win 25,000 euros. The show had a successful 2007 season. The 2008 goal was to acquire as many new fans as possible. The target audience: all viewers who like exciting reality TV needed to be convinced to give The Phone a try. They were asked to generate extra (free) media attention for the start of the second season of the show, keeping in mind a low budget. The main communication insight was that the concept of the show itself could actually be used in a surprising way to let more people experience the excitement it has to offer, making the campaign relevant to both the client and the target audience. They wanted to stay true to the core idea of the program and prove that The Phone can pop up anytime, anywhere. So they secretly hid mobile phones in the most widely viewed live TV and radio shows in Holland. And called them. The trademark ringtone interrupted the programs for minutes. When finally found and answered, the actual 'The Phone' voice-over told the TV hosts that the second season would be on soon. The hidden phones were programmed on speaker mode, so all the viewers heard the message as well. The commotion seen is real and it has the same feel as the program. None of the programs in which the phones were placed knew about it or were paid to cooperate in any way. The stunt was picked up by several news programs, newspapers, weblogs, etc. They made videos readily available online everywhere minutes after things had happened. Bronze Cannes Lions Media Winner. 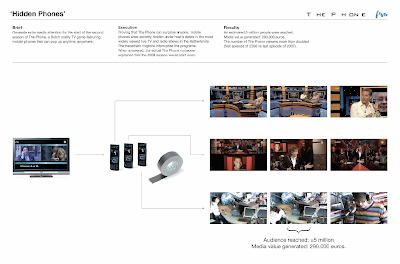