In a very difficult moment for the banking sector, BG launched a new product with a very competitive rate in the market. The business objective of the campaign was to transmit confidence and to collect new funds for Deposit Accounts from existing customers. Also, as the budget for the campaign was low for the banking standards, the communication objective was to find a big idea that could be developed in an integrated campaign in all media but with the potential of being amplified by buzz. Using Torres helping his real friends through an integrated campaign generated big affinity. Also the teaser strategy generated big buzz in media and internet, and had the whole country talking about it for weeks. A small campaign with low budget became one of the most talked about of the year. When BG finally revealed in a press conference that after the campaign, there was a financial product called “amigo”, and afterwards launched the “official” campaign in all media, the response really overcame all the initial perspectives, in business generation as in awareness for the brand. The agency proposed to call the new product “Amigo”, because in rough times a friend is who you can trust in. Torres, world soccer star, is known for keeping the friends he had before becoming famous. So they proposed him to do a campaign NOT for the bank, but for his friends. The campaign started with three teaser ads where Torres promoted the business of his friends. Later, all of them, through direct marketing told BG clients that the same way their friend helped them make money... the bank could help his friends to make money with the “Amigo” Deposit. 300% increase in new funds vs. YAG. 300 Appearances in over 50 different media channels. Mentions in all the banking sector media praising the campaign. 100,000 visits to the deposit account’s website. A ROI in media worth more than 2,000,000€. All of this with an investment amounting to less than 0.1% of the banking sector’s total annual media spend. Clients flocked to the small businesses of Fernando Torres’s friends and the Banco Gallego as well. Bronze Cannes Lions Direct Winner. 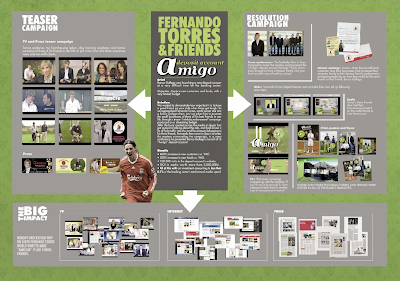