There are at least 1000 pirated movies resellers in their city. With pirated DVD’s going for a third of the price of a movie ticket, Cinemas are losing big. FOMPI--Fomento y Protección de la Propiedad Intelectual--, (Fund for the Protection of Intellectual Property) who represents the two biggest Cinema groups in the country, asked them to develop a new way to spread their message against buying pirated movies. They developed a continuous live advertising: Their own piracy resellers, and used PIRATED MOVIES AS THE MEDIA TO SPREAD THEIR ANTI PIRACY MESSAGE. Tey sold their pirated movies for the usual price of $1. After a few minutes the movie was played, it jammed and their message appeared on the screen: You get, what you pay for. The money you paid for this movie will be used to produce more copies like this one. If you don't want this happening to you again, don't buy pirated movies. They started in December with 300 movies. By the end of February they had produced and sold more than 3,000 using just the money people paid for their copies. The numbers are increasing every week, meaning that more people are being exposed to their message. Meanwhile ticket sales are slowly increasing versus a year ago. The word on the street about their movies has spread and now people are thinking twice before buying a pirated movie. At the end, Pirated movies turned out to be the perfect media to go against pirated movies. Bronze Cannes Lions Media Winner. 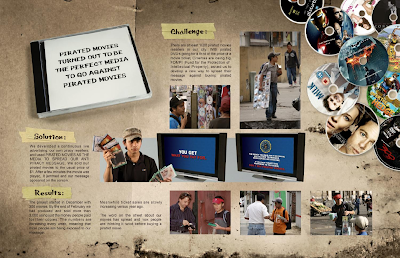 Posted by Marc van Wageningen at 10:12 AM