Their challenge was to launch the smart in São Paulo - a city dominated by cars, with a huge public transportation deficit - on a very modest budget. There were no minicars in Brazil, therefore, smart was bringing a new concept in space usage. Their target was people who are deeply interested in cultural and social life and for this reason prefer to live in large cities even if they have to face an everyday battle for parking spaces. For either work or leisure activities, finding a parking space is tough, and people usually park their cars on expensive parking lots scattered throughout the city. Their insight came from one of smart’s major benefits, occupying little space and showing that this is a major advantage by appealing to the consumer’s most sensitive side: the wallet. Without a budget large enough for traditional media, how could we communicate the car’s main attribute, its space usage, to a great number of drivers? In Brazil, students, seniors and special card holders pay half-price tickets for cultural events. Following this trend, they created “smart half-price.” More than a promotion, the idea was to create a buzz and give visibility to the car’s greatest attribute: it occupies half the space of other cars. A partnership with a large chain of parking garages was established, and they placed signs at the entrances informing: “smart pays half-price.” Parking spaces were split in half to show the exact dimensions of the car. In doing so, they created an alternative form of street communication disguised as a promotion. The concept of “smart pays half price” was later extended to toll booths, car washes, ferry boats and even to unregulated curbside valets. Their results could not be calculated by the number of people that effectively took advantage of the promotion, but by the number of people impacted by the signs. The overall cost was low, even considering the subsided discounts, because there were very few smart cars on the streets when the campaign was launched. Not everybody took advantage of the promotion, but everyone saw the signs! They managed to communicate that smart occupies half the space of a regular car in 106 spots around Sao Paulo. An average of 25,000 clients was directly impacted per day in a moment when parking costs were a relevant issue. Traditional media would not offer the same impact and the same coverage with the same budget. Bronze Cannes Lions Media Winner. 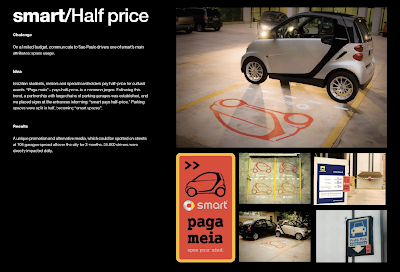