The advertising agency was looking for an accountant who is more attentive than the others. Their target group: Accountants of other agencies in Austria, Switzerland and Germany. Furthermore the agency wanted to advertise in a new and innovative way in order to boost the agency’s brand appeal. The relevance lies in the simplicity and sharpness of the promotion: The credit transfer reaches exactly their actual target group of accountants, which means they have almost no waste coverage. As the budget was quite small, they came up with an idea that is rather inexpensive and very easy to use. They used the posting line of a credit transfer as advertising space: They simply transferred 1 Euro via online banking to other agencies, using the posting line for the job ad and so inviting applications for the job of an accountant. The promotion was a great success: We have hired a new accountant. Based on their highly targeted approach, they drove a 60% response rate and numerous high caliber applications. Bronze Cannes Lions Direct Winner. 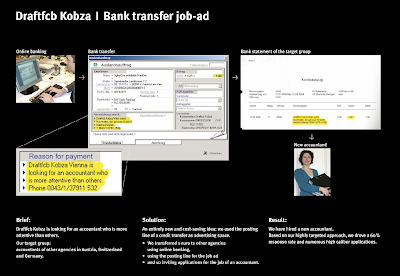