Re-Launch RNL as a "top-noth" advertising agency. Nielsen was a whole campaign. The idea was to create a turning point in the Spanish Advertising Sector. So they launched rumors and news saying that they had been named "Agency of the Year" by Nielsen. Some people eve thought they had bought the Award. They ran banners on the finest business websites. But, they were not referring to Nielsen research. They show the true story at www.nielsenaward.com The Campaign was News at Buenafuente the most seen late night show in Spain (70% share). They had free publicity generated as 250.000 Euros. They reach more than 15.000 views on Youtube in less than a week. The method of the promotion was the most relevant because they gained the attention of the Sector. They reached more than 15.000 views of the main target in less than a week and they caught the attention of the mainstream media. They had huge exposure in advertising media, they did street marketing and local award shows promoting their award. Bronze Cannes Lions Promo Winner. 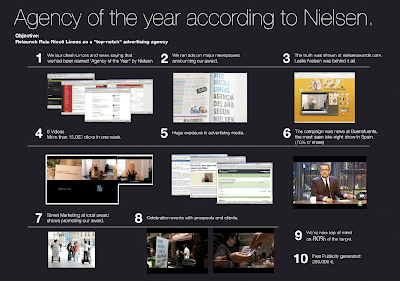