Draw tech-savvy young people's attention to digital art and have them come to Digital Art Festival Tokyo 2008. They developed a digital art widget called COTO-TAMA upon an old Japanese saying, words have souls. The messages typed through COTO-TAMA were transformed into a code which accumulated online. This code is 50 syllables with individual souls. The communication system that allowed you to code and decode messages, and the stylish design which was good for visual appreciation allowed us to jack their target's desktops with COTO-TAMA. They succeeded in creating a new community for digital art lovers. Also, COTO-TAMA acted as a direct marketing tool because organizers were able to send information about the event directly to the target. COTO-TAMA widget was the no.1 downloaded widget in Adobe Air Gallery in just 20 days. It was featured in many blogs and websites, a success as a viral content. At the festival, they executed an interactive outdoor event using the COTO-TAMA system. Without using any advertising fee, the number of people who went to Digital Art Festival Tokyo 2008 increased by 25% compared to the previous year. Tech-savvy young people tend to block out traditional advertisement and gather information from social networking services and blogs. To get our message across to our target, it was best that their campaign itself was in a digital art form. Bronze Cannes Lions Promo Winner. 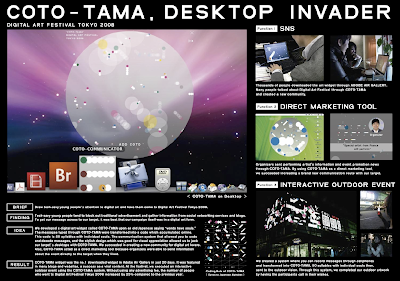