Their client, The Zimbabwean newspaper, has been driven into exile for reporting on how the Mugabe regime has rigged elections, crushed the opposition, caused poverty, disease and the total collapse of the economy. And now, having been exiled, the regime has slapped a 55% luxury import duty on the paper (as if freedom of speech is a luxury) that makes it unaffordable for the average Zimbabwean. To get the paper into Zimbabwean hands, it needs to be subsidised, and their client can only do that by raising awareness, acquiring new customers and driving sales outside Zimbabwe. The Zimbabwean is a newspaper that highlights the continuing turmoil in Zimbabwe. Instead of trying to explain all the problems to potential buyers of the paper they thought they show them a real and tangible symbol of the country's collapse - the worthless currency. To be able to casually throw away billions and trillions of dollars of currency, by handing them out and with their message stamped all over it speaks far louder than any letter or written appeal ever could. One of the most eloquent symbols of Zimbabwe’s collapse is the Z$ trillion dollar note, a symptom of their world record inflation. This money cannot buy anything. But it can become the advertising. So, they led with a direct campaign by turning the money into its own medium by printing their messages straight onto it. They handed out flyers. They mailed bundles of cash to famous people. Wherever the Zimbabwean was sold, we had a poster-with notes that people could detach to keep the email address. They made murals and even the world’s first billboards out of real money. Overnight, trillions of dollars of Zimbabwean banknotes achieved what they’d never been able to buy – real results. By sending their mailers to media personalities and by distributing flyers on the streets and having tear-off posters, they generated massive traffic and talkability. Within days they were in the national press on national television and radio. And then the internet discovered it and it spread across the world. As the campaign continues, sales of The Zimbabwean continue to soar. In the week of the roll-out alone, the website logged over 2 million hits. They used Mugabe’s own creation against him. Silver Cannes Lions Direct Winner. 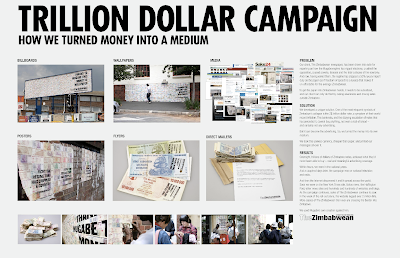