The nation was in the depths of winter and recession, making many people sensitive about corporate insincerity and dishonesty. In this climate, T-Mobile had to launch a new campaign, one that people could believe in and trust. One that would make people feel good about the brand. So they couldn’t just tell people T-Mobile's new philosophy, they had to prove that, Life’s for Sharing. By doing so, they had to add another 143k customers. Their focus was on a new, upmarket audience, likely to spend £30 a month, as most of T-Mobile’s existing customers spend only £10 per month. The event was so memorable the public took their mobile phones out to share it with calls, texts, photos and videos. The dance became news in its own right, covered on National TV news, national press, radio phone-ins and bloggers. The dance spread across the Internet. It was discussed by bloggers, Facebook groups multiple websites. Perez Hilton’s site described it as “One of the raddest commercials anywhere”. The Sun Newspaper described it as an “epidemic of joy”. T-Mobile had gained people’s good will and trust. In a bleak time, the brand had cheered people up. They decided to create a live event so memorable that people just had to share it. At 11am on 15th January a single commuter started dancing. Moments later hundreds more joined in, including hundreds of genuine members of the public. Everybody there enjoyed a moment worth sharing. The dance aired 36 hours later, in a full length peak ad break. It was simultaneously launched on T-Mobile’s YouTube channel. Over the next three months the dance was shared through TV, radio, press and online advertising, We projected a 5% increase in inquiries and footfall. We gave out 2,500 credit card size leaflets to say that the ad was by T-Mobile and that it was being broadcast on TV the next day. A staggering 13 million hits on YouTube. It’s the 12th most all-time viewed in the Entertainment category on YouTube (UK). The most viewed commercial in the last 365 days (ViralVideoChart.com) 43 Facebook groups, largest with over 4,500 members. £1.2 Million worth of free media and press coverage. At a time when national high street sales were at an all-time low, T-Mobile Stores had a record footfall, with a 5% increase on last year. T-Mobile had the lowest cost per response, ever. Cost per acquisition declined by 24%. In a recession, T-Mobile had a 52% increase in sales from last year. 80% of these customers were the intended top end of the market, £30/month. Gold Cannes Lions Direct Winner. 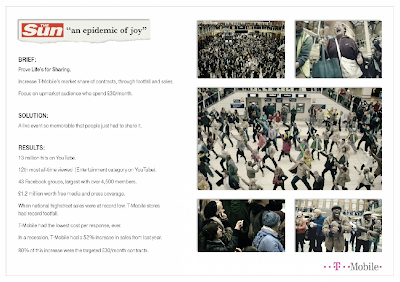