The Guerilla Garbage campaign ran throughout September, covering 28 suburbs in Fremantle, Joodalup, Melville, South Perth, Wanneroo, Cambridge and Victoria Park. Given the distribution of the stickers, they estimate they were visible to over 170,000 local residents (source ABS 2006 census). The entire campaign was executed for just AUS$1400 (less than a quarter of the cost of a single Super-8 site). Although no tracking data is available for the Guerilla Garbage element of the Change is Good campaign, the Perth IKEA store saw a 32.68% year-on-year increase in visitor numbers and a 42.8% year-on-year increase in sales during September. Their creative strategic solution was simple: the junk that people were putting out on their verges was visual proof of what IKEA was telling them on TV and in press. Change is good. They worked out which suburbs were having their verge-side rubbish collection at the same time as the TV campaign was airing. They then targeted these suburbs with their Guerilla Garbage campaign. They printed over 600 Change is good stickers and placed them on discarded beds, wardrobes, sofas and other furniture put out by residents. The addition of this simple statement created hundreds of unique outdoor extensions to their TV and press campaign, highlighting the positive benefits of change in a highly visible and relevant way. People's natural curiosity and the imposing presence of the junk on the verge did the rest. The campaign was subsequently documented with images uploaded to the popular picture-sharing site, Flickr. IKEA Western Australia asked them to develop Outdoor to support the Change is Good television and press campaign they created to launch the 2009 IKEA catalogue. Throughout September 2008, over 1 million catalogues were being distributed to homes across the Perth metropolitan area. Whilst many people knew about the IKEA store offering, the communication challenge was to demonstrate how the simplest of changes in our homes can make a difference to the way we feel – thereby creating a real appetite for change. They saw an opportunity to take a highly-innovative approach to out-of-home by delivering IKEA’s Change is good message via the medium of Perth’s once-yearly verge-side household junk collection. Every year across Perth, local councils collect junk residents don’t want, from the street verge in front of their houses. Their Guerilla Garbage campaign hijacked this to highlight the positives of change to IKEA’s customers, directly outside their homes. Bronze Cannes Lions Media Winner. 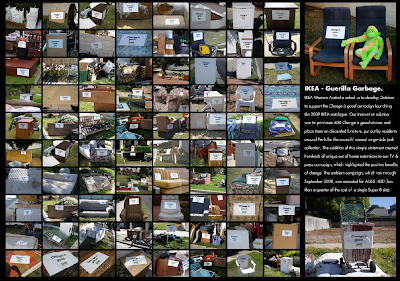