ANZ is one of Asia Pacific’s oldest, largest banks. They recognised that they weren’t connecting with the potentially lucrative student audience, but didn’t want to resort to $40 bribes to open accounts like their competitors. For 2009, they decided to take a more long-term, sustainable approach, with a campaign that was customer-centric, and scalable enough to evolve each year. They wanted to provide students with relevant products, tools and advice based on their needs and communicate in student-friendly language – without trying too hard to be cool. Instead of presuming that students want to engage with the bank, this campaign found a way of connecting with them on their own terms. The creative approach marked a brave new direction in ANZ’s communication with this audience, building on their ‘Easy banking’ proposition but re-interpreting it for the student market. Instead of just providing a one-off incentive to open an account, the campaign actually recognised what students’ lives are like, and offered real support and assistance. Their research showed that students don’t care about banking – but they do care about having no money. And you can’t tell them anything – they already know it all. So instead of just forcing products on them, they decided to take a softer approach, providing real help and advice that made a difference to their lives. They created an online hub called ‘gettingUthru.co.nz’, populated it with money-saving videos, and invited students to submit survival tips of their own. They could also set budgets, search for local deals, look for jobs, find the right products, and open accounts. For the first time, students actually chose to communicate with the bank, using the website to create a community for student survival. In just one month, over 10,000 students flooded online, posting hundreds of tips, from the practical, to the tongue-in-cheek, to the downright desperate. By the end of Orientation Week alone, over 7,000 students had opened accounts - that’s a 10% increase year-on-year, without any account-opening incentives. Proving that, with the right approach, banks and students can speak the same language. And the conversation is just getting started. Bronze Cannes Lions Winner. 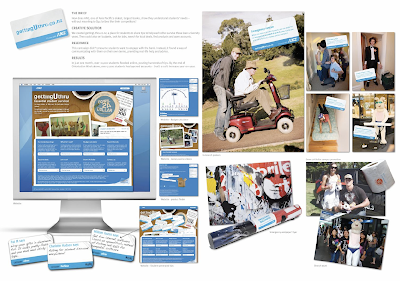