Prostate cancer is the most common cancer amongst men. One of the symptoms is the increasing difficulty to urinate. However, when detected and treated in the early stages of disease, prostate cancer has a cure rate of over 90%. The Belgian Association of Urologists asked them to raise awareness about prostate diseases by convincing men to visit their urologist for a screening. But how can you reach all Belgian men without a media budget? They took Belgium’s most famous landmark: Manneken Pis, a small bronze fountain depicting a naked little boy urinating. Simply by lowering the water pressure they turned Manneken Pis into Manneken Drip. To the spectacle, they added a sign reading ‘Having trouble urinating? Have a prostate check today.’ The reactions were overwhelming. The dripping statue was an item in every possible newspaper and an issue on more than 15.000 websites. Their action got coverage on national radio and tv news. Urologists were interviewed to explain the problem on television. and EU Health Commissioner Markus Kyprianou spontaneously supported their action. But more important: the awareness campaign didn't miss its goal. Their message reached an estimated 85% of the Belgians. Bronze Cannes Lions Media Winner. 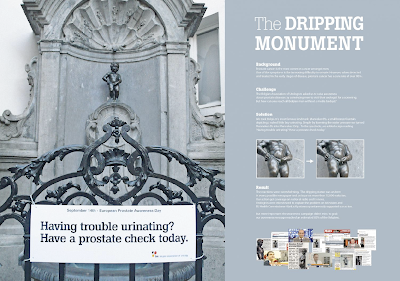