Their assignment was to help Barack Obama win the Presidency of the United States by targeting voters in any key battleground state. Florida was such a key battleground state, and in 08’, it was up for grabs. An important voting group in Florida is its elderly Jews, but they were skeptical about Obama due to misinformation. So, in order to get elderly Jews to vote for Obama, they targeted the one group they’d listen to: Their grandchildren, and encouraged them to visit their grandparents in Florida to educate them about Obama. This intergenerational conversation was the key to their campaign: The Great Schlep. There are 400,000 elderly Jewish Voters in Florida, and like most elderly voters, the vast majority of them vote. This makes them a powerful voting block in Florida, and if Obama were to win a large percentage of them (despite their initial reservations) he’d win the election. In addition, since the majority of young Jews, like most young people in general, were Obama supporters, targeting them directly figured to be most effective. And besides, what Jewish grandparent wouldn’t want a visit form their beloved grandchild? They launched the campaign with a website aimed at inspiring, educating and connecting young Jewish people about the Great Schlep. The website consisted of Obama information/videos for viewing and sharing, a Great Schlep Facebook community component, talking points for engaging Jewish grandparents about Obama, and an online store with Schlep merchandise. In order to drive traffic to the website, they created a viral video about the Great Schlep. This video was seeded on a few video-sharing website sites, such as YouTube, and on the Great Schlep homepage. Their goal was to drive enough traffic to the website/Facebook group so as to create a movement with real political impact. Within a few weeks, The Great Schlep Facebook group had 25,000 members, and the Great Schlep talking points had been downloaded 1.2 million times. The Great Schlep was featured in every major American newspaper and on all major television stations. Networks such as CNN and ABC followed “Schleppers” to Florida from all over the country. The Great Schlep video featuring Sarah Silverman was hosted on thousands of blogs gaining more than 4 million views. The Great Schlep campaign received 342 million media impressions. On Election Day, Obama received the highest percentage of Florida’s Jewish voters in 30 years, and won Florida by 3 points. (Source: Optimedia) Gold Cannes Lions Direct Winner. 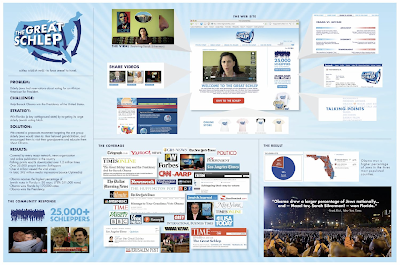