The goal was to develop a tool to arouse the interest of existing customers in the new Mercedes Benz Sprinter Transporter and to encourage them to take a test drive. The strategy was to provide every Mercedes-Benz dealer with a tool, with which he could e-mail to his clientele in a completely new way. Thereby, small business owners, that already had an old Sprinter, were encouraged to experience the features of the new Sprinter and, eventually, buy one. The comparison between a Sprinter and a computer folder is immediately evident for every small business owner, since he works with both on a daily basis. But also Mercedes-Benz could benefit from this completely new way of communication and strengthen its position as a technologically innovative brand. The idea was to parallel the similarities of the Sprinter transporter and a computer folder. Why? Because both can contain more than one would imagine. Therefore, they created a special "Sprinter Folder", loaded with multiple subfolders, whose titles and icons made up a story about the Sprinter. They communicated this to where small business owners spend a lot of their daily time: in the Windows-Explorer of their computer. So, the desired, average response quota was met and exceeded. Another strength of the idea was the cost-response-ratio. Using a computer folder as a vehicle does not cost a thing and "drives“ through the Internet to his recipients for free. They reached a response quota of 18%. Additionally, 50% of the people who responded to their dealer's mail did a test drive in the new Sprinter, which was the goal of the campaign: to make the new Sprinter an experience. Silver Cannes Lions Direct Winner. 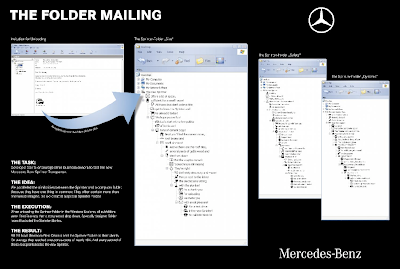