1. Client’s orientation points: Raise awareness of the Special Olympics in Japan effectively using a limited budget. 2. Solution: Produce a “message baton” using the idea of a baton for sports competition and engraving this with a message. Spread the message through a baton relay of handing it from one person to another. This revolutionary idea makes this an ongoing campaign without spending any money. Client evaluation: The clients raved that it was the most innovative idea they have ever seen. Media coverage: In media value the baton starting ceremony picked up by newspapers and TV accounts for approximately $112,000 in free publicity. 3. Strategy validity: We were able to send a deep and impactful message through people without using money as other campaigns do. It provides a heart warming moment to many people almost as if it were a present from a stranger. Bronze Cannes Lions Promo Winner. 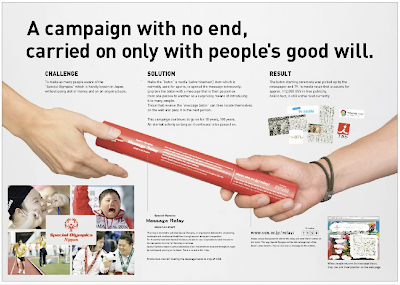