In a time with all time high prices on fuel and an emerging financial crisis, Suzuki wanted to put focus on the very fuel efficient part of their portfolio. The communication objective was to get people to understand how much money they could save on fuel if they replaced their old car with a more fuel-efficient Suzuki, thereby putting the Suzuki brand at the consumer’s top of mind. Ultimately, the goal was to clearly position Suzuki as the major brand in the segment for smaller, more cost-efficient cars and also increase sales of 3 particular models. To demonstrate how cheap it is to drive one of these 3 Suzuki models, overnight, they transformed a regular fuel station in a congested area into a branded Suzuki gas station, where they sold the fuel at a 30 percent reduced price, which is how much longer these Suzuki models drive per litre compared to the average car in Denmark. During that one day of the event, more than 2.000 paying customers bought 14,925 litres of fuel and they experienced personally how much money they could save driving a fuel-efficient Suzuki. The event gained broad media coverage online, from the tv-stations, on radio and in national newspapers. One month later, sales for the 3 models had increased by 12,5%. This especially imopressive, given that the overall car market in Denmark at the time was in decline. Market share for Suzuki increased with 27% from August to the end of September 2008. This promotion event was extremely relevant for Suzuki because it made Suzuki’s proposition for these 3 models very tangible to the consumers. Instead of being just another claim from a car brand, we made it very real and gave the consumers a chance to experience personally how their expenses on fuel would feel if they were driving a Suzuki. Bronze Cannes Lions Promo Winner. 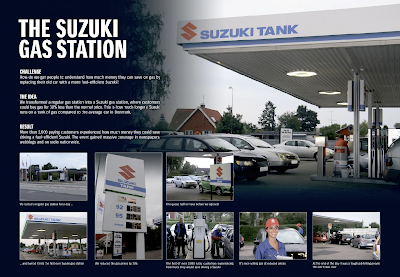