The target audience were not true football fans but rather the broader group of sports loving Australians who are fickle when it comes to deciding what matches they go to; tending to only make an effort to attend “draw card” games. The real barrier was that they simply didn't care about Ghana. Ghana was an unknown country at the other end of the earth with no meaning, no personality and no face. They had to do something that made them feel connected to the opposition team. Ticket sales had reached a plateau with patriotic Aussies, so any insight that could drive ticket sales with their broader target was considered relevant by the client. For their target audience, igniting some personality into an opposition team they had never even thought about was a highly novel way to focus their attention on what looked to them like a non-event match. Their solution was to turn the usual sports marketing paradigm on its head. Rather than focus on garnering support for Australia we focused on making Ghana the focal point. Their idea was to create a fake Ghanaian fan club, intent on spelling the word ‘GHANA’ on their chests. But due to the lack of Ghanaians in Australia they couldn’t find a fifth member, and were hence missing the “H”. So they sent them onto the streets of Sydney, where they appealed to the public to attend the game and be their missing “H”. While their idea began as a piece of ambient media, the interest it generated meant that it channelled into other forms of media, such as online blogs and live television e.g. interviews on national news programmes. In just 24 hours the Ghanaians’ appeal snowballed into a national TV news story, with interviews on various morning shows and primetime news segments around the country. They were also the topic of discussion on numerous blog sites around the globe. In under 48 hours the Ghanaians had been exposed to hundreds of thousands of people, giving the FFA $250,000 worth of media value for a budget of only $15,000. And all of this translated into a 50% increase in ticket sales in only three days. With the profile of football in Australia still growing, any results that indicated support for the game was immensely important for the FFA, who are currently driving Australia’s bid to host the 2018 FIFA World Cup. Gold Cannes Lions Media Winner. 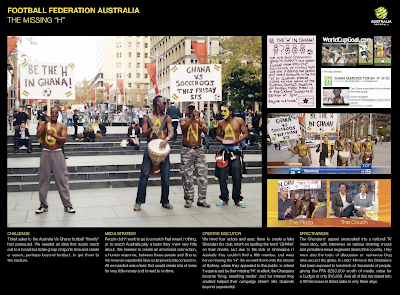 Posted by Marc van Wageningen at 10:11 AM