In the context of the launch of the new IKEA catalogue they had to generate attention among young people for IKEAs latest products. How do you get maximum attention of young people? Advertise in cinemas but don’t do a standard commercial. So they inspired moviegoers with an unseen idea to get them spreading our message themselves. They used existing great movies with great actors in which IKEA products are seen accidentally. With a smart and clever trick they directed the people’s attention to the IKEA products. Guerilla promotion teams equipped with powerful portable projectors brought names and prices of IKEA products during the movie on the screen – next to Brad Pitt, George Clooney and other famous actors. This surprising execution fits perfectly to the IKEA principle: surprise the many people with fresh ideas for everybody’s everyday life. After the show they consequently distributed IKEA catalogues in front of the cinema. With a little investment into projectors and slides they got several product placements during famous movies for free. The guerilla action reached over 13,000 viewers in 92 screenings. In front of the cinemas over 5,000 IKEA catalogues were distributed – instead of the estimated 1,000. Silver Cannes Lions Media Winner. 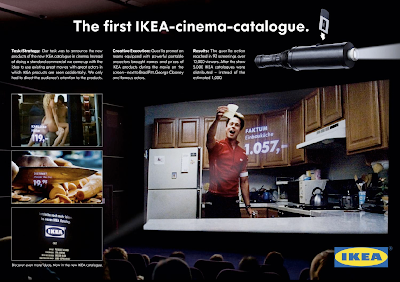 Posted by Marc van Wageningen at 10:50 AM