The Rodney district contains a highway that leads north of Auckland, New Zealand's largest city. It’s one of the most dangerous roads in New Zealand and has a rising death toll due specifically to speeders. The message: Slow down. They wanted to prove how violent the force in a crash was, so they had an engineer calculate what a head on collision would be equal to in grenades. At 125 kph it is equal to 10 grenades exploding. To demonstrate this they blew up a car, collected the debris, reconstructed it with 1000's of pieces of string and invited people to see it. Visitors included the Government officials, TV3 news (News Zealand's main news station) and, but most importantly, a surprising number of 18-25 year old males. Bronze Cannes Lions Outdoor Winner. 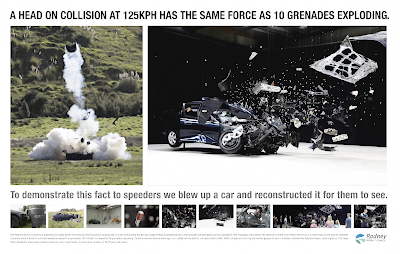