The Korea Heart Federation (KHF)’s biggest concern and one of the major causes of death for Korean people today is heart disease. Since heart disease is incurable, the best cure is to prevent it. However, despite many efforts and campaigns, many people still do not realize the seriousness until they actually fall ill. The risk factors such as smoking, alcohol and obesity are still increasing. In consideration of this fact, KHF, through an innovative campaign, aimed to create an atmosphere where everyone is concerned about protecting their hearts from a young age, before they fall ill. Their concept was to help people recognize each of their hearts as a valuable gift, not just a biological organ inside their body. The best way to deliver this message was by actually allowing people to get an opportunity to listen to their hearts, enabling them to share a miraculous moment with it. Therefore, they developed the 'Listen Device', which digitalizes the target's heartbeat into an MP3 while listening to one’s own heartbeat. Then, they combined the digital heartbeat with music and art, and saved it permanently on the website so that people could create a deeper bondage with their hearts. The ‘Listen’ campaign was the greatest success in the history of Korean health. The total number of participants increased 2700% compared to last year. Even with no particular advertising spent, over 20,000 people visited the website and more than 50,000 people visited the studio. During the campaign period, over 500 blogs and 40 different newspapers introduced their campaign. Also, 90% of the participants requested a health inspection. Due to the success, the government has promised financial support for the next campaign and a monument including the participant’s heartbeats will be kept in the ‘Heart of Seoul’, Nam Mountain. The key success to KHF’s ‘Listen’ campaign was participation. The sound of a person’s heartbeat through the ‘Listen Device’ was digital content connecting on-line and off-line campaigns and used as ‘new-media’ enabling active participation. By relating music and art to our hearts, they were able to create a cultural turning point where people began to respect and truly love their own hearts. The heartbeats of singers were released as a digital album, and a heart experiencing studio combined with media-art was created for the first time for an individual to actually 'meet' their own heart. Silver Cannes Lions Promo Winner. 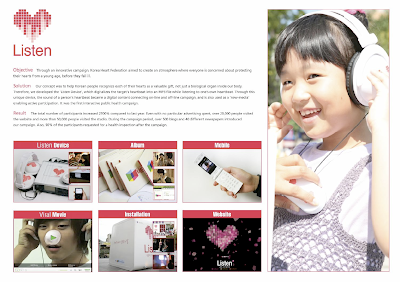