Bicycle shops are usually fairly conventional when it comes to marketing: Every season has its own "Now on sale"-drives. Sportspec ("The Sport Specialists", formerly "The Bike Specialists" in Gothenburg, Sweden) needed a way of being more active even in-between the seasonal sales. How can they create an attractive offer that can be used whenever they want and doesn’t risk drowning in media noise? The target audience was car owners that got a parking ticket in central Gothenburg. At no time is their target group more frustrated over the difficulty of finding parking in central Gothenburg, than when they’ve just gotten a parking ticket. As an encouragement, and a way of showing them an alternative to cars and tickets, they provided a folder with which they could turn the ticket into a discount when buying the bicycle of their choice. The black and yellow graphics are well known to biking people in Gothenburg which make the envelope also act as a kind of mini-poster for Sportspec, spread over cars in central Gothenburg. On cars with a parking ticket, Sportspec placed an envelope right next to the ticket. When the car owner placed the ticket in the envelope, it magically transformed it into a bicycle discount. The larger the fine, the more substantial the discount at Sportspec. The envelope turned bad news into better news. The campaign is still running (and will keep running for a long time – it was constructed with longevity in mind). Up to date, one thousand "discount tickets" have been handed out. One out of every seven has been converted into discounts on (very expensive) new bicycles. Bronze Cannes Lions Winner. 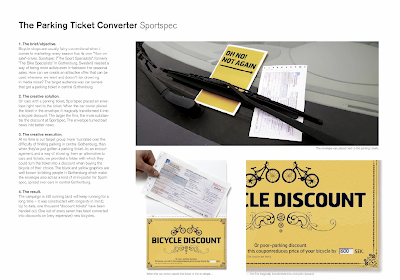