In spring of 2007, ABSOLUT VODKA launched its new brand campaign: IN AN ABSOLUT WORLD. Inorder to excite people about the brand and its new campaign, ABSOLUT requested communication that went beyond classic media. To achieve this, they decided to give consumers the chance to experience the ABSOLUT WORLD at frst hand. They perfected something that party people all over the world frequently make use of: They created the perfect taxi ride, by making it fast, thrilling and free of charge. For one week, a fleet of Porsche Taxis chauffeured around everyone anywhere in Hamburg, Munich and Berlin. All they needed to do was raise a hand and flag an ABSOLUT Taxi. At the end of the week, the ABSOLUT Taxis had not only excited over 1200 passengers and countless pedestrians, but generated over 15 million media contacts through TV, print and online news coverage. Bronze Eurobest Winner 2007. 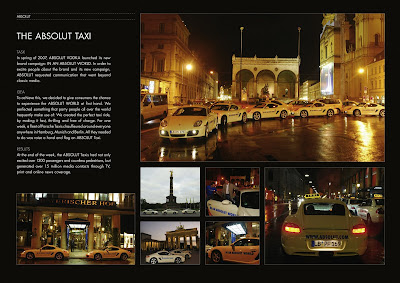