After more than 50 years on the market, Onsala is the best known brand of sandwich sausage in Sweden. Trough the years, the package and logo design have been more or less the same, making it easily recognizable on the supermarkets shelves. Now, the Onsala-sausage has been inproved. It comes ready-sliced, and in a special, new package. No more need for sharp knives - even the childeren can make their own sandwiches, without the risk of losing a finger or two. The new sausage is exactly the same as the old one. The only difference is that it now is available as ready-sliced. Since the specific design of the Onsala-Sausage is so well known, they show the famous old package in the advertising- instead of the new. The only difference is that the billboards, posters, ads, trolleys, buses ect showing the old sausage, is sliced. During the weeks of the campaign, the "sliced" advertising became the talk of the town. The ads fluttered in the wind on billboards, buses, subways and shopping-trolleys, and were frequently mentioned in press articles and on radio-shows. The sales for the ready-sliced sausage was 140% higher than projected. Gold Eurobest Winner 2007. 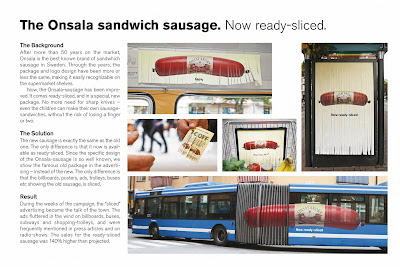