Garagetv asked to do a radiocampaign to make people discover garagetv.be (a portal similar to youtube). They pushed it further and did some candid radio: they asked wellknown actors to do some radiocommercials. They didn't know that they were filmed. Then they send in some reptiles and a very bad technician. The films were put on garagetv. The radiocommercials announced this idea. From the moment the radiocommercials went sent on air, the traffic to the site got a gigantic boost. In just four days time, 150.000 people discovered garagetv.be. Silver Eurobest Winner 2007. 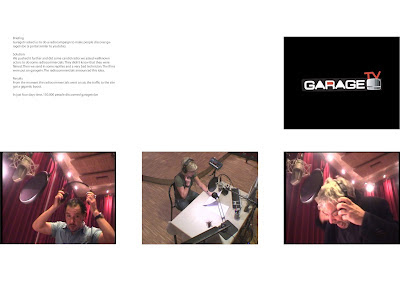