The objective was to convince people that TALLY WEiJL makes sexy people totally sexy and to promote the current InStore Promotion of the microsite www.wemakesexytotallysexy.com. Further TALLY WEiJL intended to push forward their new campaign in front of competitor retail shops to link people to the TALLY WEiJL Shops. Additionally to the nationwide out – of – home media planning, made by Bliss communication as well, they introduced a guerrilla promotion bases on branding people with a sprayed logo of the microsite on their clothing. Two totally sexy promotion girls and a cute guy in a pink rabbit disguise were booked in Berlin, Cologne, Basel and Zurich to invite people becoming totally sexy. The rabbit had a huge sign with the logo of the website and started chatting to people. The sexy promotion girls did the actual spraying and a little movie of the action, which was later published on the website. As a personal motivation every participant got 20 % off vouchers for their next shopping at TALLY WEiJL. Within in 2 days more than 200 people in these cities were excited of becoming part of the promotion and actually allowed the promotion team to spray their clothes. The website contains almost 300 self made movies including the ones which were shot by the teams. People can buy a spraycan set including a shirt in stores now for participating on this project. 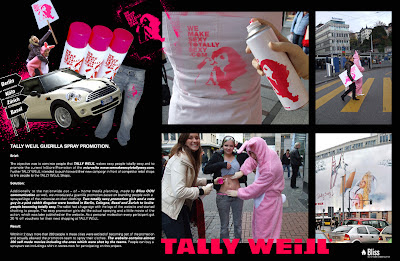 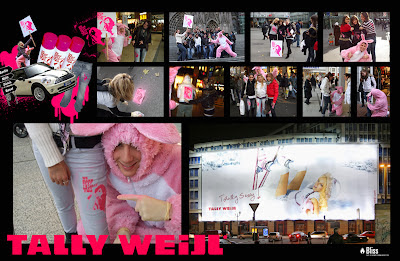