In the run-up for the Swiss Robbie Williams concert, the radio station "Energy Zurich" gave away G-strings among the female Robbie fans, with an imprint of the radio station logo. Always in a double pack: one to wear and one to throw on stage. The present was a success. As well for the fans as for Robbie Williams. During the show a G-string ended up flying up on stage, Robbie spontaneously integrated it in his show. Next day, the picture of Robbie Williams with the G-string from Radio Endergy in his hand was in all the big media: the news on TV as well as on the front pages of all Swiss newspapers. No young radio station could wish for a better advertiser. 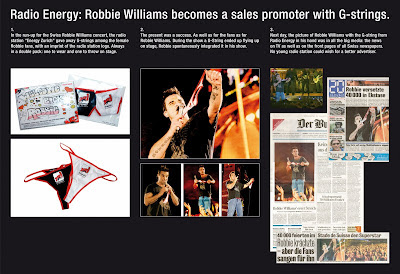