DAS TAXI has established itself amongst Hamburg's taxi cab operators as the "Autonomous Way Ahead" The simple product statement, "Anytime, Anywhere" should be communicated towards local public transport passengers to create direct contact with potential customers. DAS TAXI attracts attention whit its own interpretation of all public transport insignia: Next to the official route information hangs a special route map. Every street in hamburg can be found on it. To highlight the billboard's launch, DAS TAXI distributed the timetable 06/07 to waiting passengers. Times, accurate to the minute, services and booking options are shown for every street in postcode region 20. An online journey planner enables users to specify the start and end of their journey in great detail. Local newspapers reported that passengers were confused by the "new" route map and the time table. In the two months of the campaign orders for "DAS TAXI" increased by 7% compared to the same period in the previous year. After a few weeks, Hamburg's passenger transport authority banned the billboards from their stations. Silver Eurobest Winner 2007. 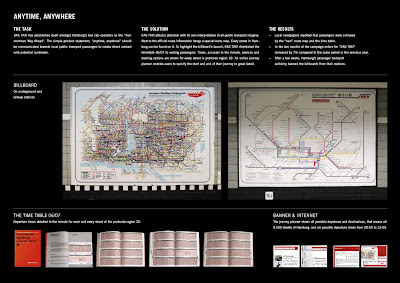