In spring of 2007, ABSOLUT VODKA launched its new brand campaign: IN AN ABSOLUT WORLD. It shows what the world would be like, if it were as perfect as ABSOLUT VODKA. In order to excite people about the brand and its new campaign, Absolut requested communication that went beyond classic media. To achieve this, they decided not only to show what an ABSOLUT WORLD looks like, but gave consumers the chance to experience it in their daily lives: They published the perfect newspaper. Distributed for free, with real editorial content that was entirely positive and interesting to read. They perfected the taxi ride by supplying a fleet of free-of-charge Porsche Taxis. A visit to the nearest ATM cash machine became a unique experience when they introduced a Happy Hour. National press coverage of this ABSOLUT WORLD WEEK was gigantic. The different activities were featured in articles of over 55 print and online publications, and made the news on numerous radio- and TV shows. All together it generated a cool 35 million media contacts. Bronze Eurobest Winner 2007. 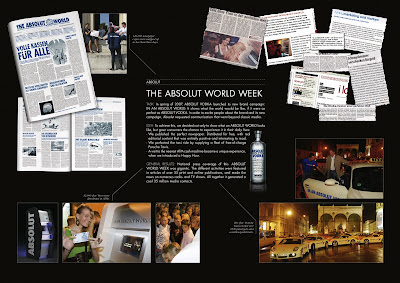