To launch the new God of War II game an e-mail competition was created to give hard core gamers the change to get the first copy of the game they've been waiting for. Step 1: All PS2 and PSP owners receive an e-mail message with the God of War II logo as an invitation to click and win. Step 2: A click brings them to a webpage with a picture of Athena, the goddess of war. The text reads: "The Oracle decides over the destiny of Athena, The Goddess of War. Print this page and find out if the Gods are on your side. Perhaps you'll be rewarded with a God of War II price". Step 3: This platform coverted the print command in two different print results. When the print is launched from the recipient's pc the image of Athena remains on the screen. But what comes out of the printer, is quite different. The winners: They get the message "Congratulations! The Gods have granted you the joy of eternal gaming. You win a God of War II Game!" The losers: In 99% of the cases, however it is the decapitated and heavily mutilated head of the goddess with the message " Too bad. The Gods have decided otherwise". 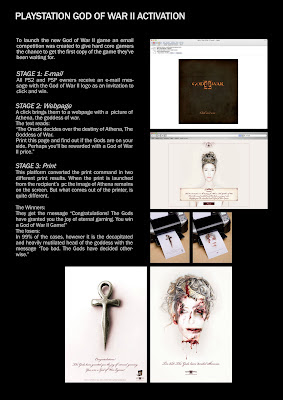