To promote an article in P Magazine about the daily life of women wearing burkas in Afghanistan, 127,000 of these printed bags were distributed at POS a few weeks before the edition was published. The black bags were designed to look like a traditional burka dress, so that when a P Magazine was dropped into it, the girl on the cover would appear to be wearing the burka. The same effect was achieved with many other magazines. 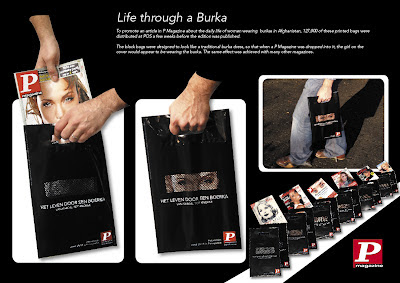