Pattex glues everything. Domonstrate this in the most spectacular way. They placed the pieces of an oversized broken vase in a specific way. Only from one certain point of view could the vase be seen as one whole piece. Here they requested the observer to take a photo of the perfectly "glued" vase with his mobile phone and per MMS send it to Henkel. Every participant received a product sample and automatically took part in a raffle of 10 holiday trips to Greece. The installation was placed in many German cities at highly frequented places. The 25,000 Euro vase not only became talk of the town but also caused a lot of positive PR in the value of about 275,000 Euros. It was the most succesful Patex direct campaign of the year. Silver Eurobest Winner 2007. 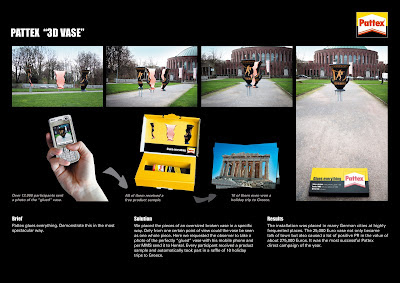