In the run up to a value added tax increase, the brief was to draw maximum attention to the Hornbach superstores and their important size for D.I.Y. enthusiasts. An amateur video of an Amirican Stuntbiker who failed trying to jump over one of these stores started the campaign on mobile media and in the internet with more than 3 Mio. views and a huge discussion. Of course it was a trick, but this made the real Ron Hammer campaign take off. Step by step the media, both on- and offline were brought on board to increase the credibility and gradually, even non believers became believers. Ron Hammer became talk of the nation. During four weeks the frontier between reality and fiction disappeared: Ron Hammer became real. During the campaign Hornbach was not only the most tlak about D.I.Y. store, Hornbach also jumped way ahead of the competition at the same time. With a plus of 6% compared to the whole market sector. 2x Gold Eurobest Winner 2007. 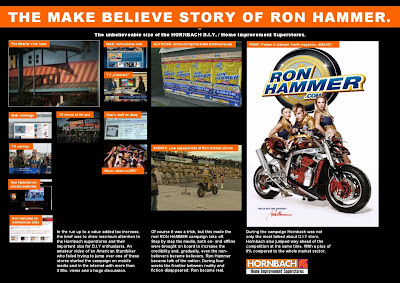