With a simple but highly dramatic activity, Animal Public is suporting the declaration of the European Parliament to ban seal products in the European Union. As of January 1st 2007 Germany wil be holding the Presideny of the Council of the European Union. Therefore Animal public has sent out an innocent looking white parcel to Mrs. Chancelor Dr. Angela Merkel, to Horst Seehofer (Minister of Agriculture and Consumer-Protection) and many others. Each of the white parcels contained a personal letter and a baseball. A cute looking seal-face was printed onto the front of it and the cruel truth was printed onto the backside: "Every year hundreds of thousands of seals are killed with a bat". 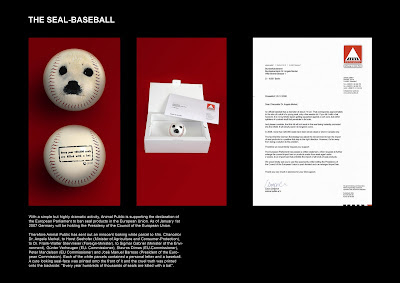