In 2007, two German cities (Hamburg March 2- 4, and Mannheim April 27-29) show Nabucco by Giuseppe Verdi as a monumental opera in sports stadiums. The opera is famous for the song “The Prisoner´s Chorus”. The producer needed to sell a minimum of 17,000 tickets in Hamburg alone. But three months prior to the shows and after two periods of conventional advertising only 5,500 people wanted to see the opera. In line with an integrated campaign, they produced the “Bus Stop Announcements” to the tune of “The Prisoner´s Chorus” which we aired on Hamburg city-line buses. The names of the single bus stops were sung by a professional tenor. Additionally, the passengers got more information via the monitors and advertising spaces on the bus. Within the first two weeks of communication, ticket sales trippled. Finally, all three Hamburg shows were sold out. Gold Eurobest Winner 2007. 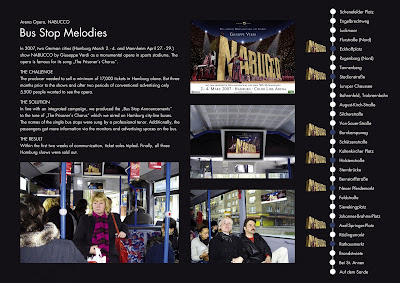