The highest ads in Germany.

Develop a promotional idea for the toughest SUV from Mercedes-Benz: the G-Class. Proving the extreme off-road ability of the G-Class demands extreme methods. They took their advertisements to where one had never been before: to the summit books on the highest mountains in Germany. And so an all-terrain team of copywriters, art directors and illustrators left the well-trodden communication paths and clibed to the peaks to immortalise the G-Class with illustrated ads. To prove: the G-Class goes further. As climbing is very popular in germany and every climber looks into the summit book, the campaign resulted in 190 test drives at Mercedes-Benz dealerships within just a few days. Photos of the advertisements appeared in several climbers blogs, at flickr.com and in local dailies. 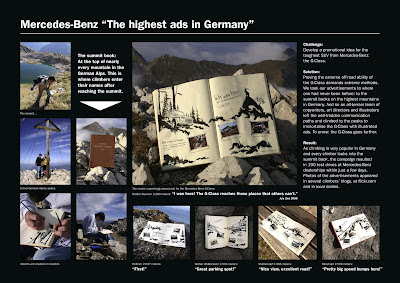