Sex tourism was becoming an inconvenience at Natal, a beautiful city in Brazil's coast. With city hall's effort to inhibit the problem, a campaign had to be created with ads that would reach foreign tourists and warn them about the risks. At Augusto International Airport, thousands tourists arrive every week. By the baggage claim, toerists had the first contact with the city hall's campaign against sexual tourism. A suitcase placed at the luggage carousel brings the message of the campaign. At one side - for the good tourist - the city's welcome. By the other side, the straight message: "if you came after sex tourism, get your bags and go back home". 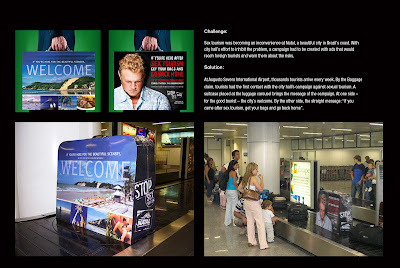