A race on stilettos in the high-end fashion shopping street in Amsterdam was the initial idea. The winner would win 10K shopping money. The concept was announced through an integrated communication campaign. The buzzing and teasing campaign announced the run through print, television, free publicity and buzzmarketing. The website supported the concept. The Glamour Stiletto Run campaign climaxed in a guerrilla 'hit & run' event, claiming the PC.Hooftstraat one hour filling it with a huge crowd, national and international press and with stiletto wearing shop-a-holics running the race. The Stiletto Run was implemented March 2006 and is repeated March 2007. To push the March fashion edition we wanted to create an explosive buzz which would build Glamour magazine as a new and distinctive title. There are a lot of competitors and the market is in decline. Therefore we had to create something significant and memorable with limited budgets. By developing an integrated brand campaign we aimed for quick mental market leadership. It has become clear for consumers as well as competition that Glamour is more fun, fashion and more Glamour to the people. Gold Eurobest Winner 2007. 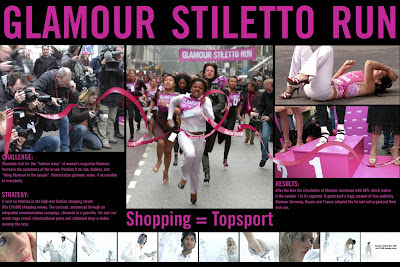