With almost 200 hp, the Clio Renault Sport is Renault's turbocharged model. In order to position the Clio in an overall more sporting context, advertising is focused on the Clio RS. The objective: to communicate the dynamism of the Clio RS on the Internet for direct interaction with the target group. Users chase after the Clio motion blurs and race from banner to banner. The virtual course leads through several European cities. Each player's time is stopped precisely to a hundredth of a second. The high-score ranking at clio.de ultimately shows who's the fastest. After registering, users could challenge their friends to another race through Europe. 11,412 starts of a banner race in just five days. The checkpoints were clicked 20,601 times. 1,200,000 ad impressions in less than one week. 68,000 people in total visited clio.de. Gold Eurobest Winner 2007. 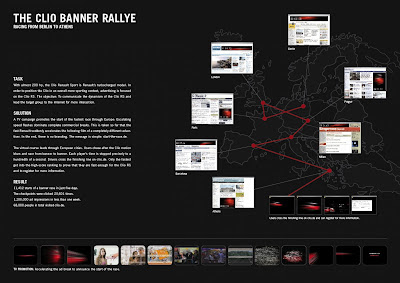