Citymail "Does a log hut fit through a letter slot?"

CityMail is a new Danish postal service. They were looking for an event to proudly show their flexibility and their ability to mail anything and everything - as long as it could trough a letter slot. They rented an empty shop in central Copenhagen. Over a two-week period we mailed a Swedish log hut to the adress using CityMails own letter carriers. A craftsman located inside the shop received beams, nails, screws, paint and roof grass through the letter slot while building the log hut. A web cam documented the event, so everyone could follow the building process at CityMail's web site. The marketing campaign received a lot of attention in the danish, Swedish and Norwegian media. When the hut was completely finished, they had planned a big reception party at the shop, for potential and existing customers and CityMail employees. Grand Prix Winner Eurobest 2007. 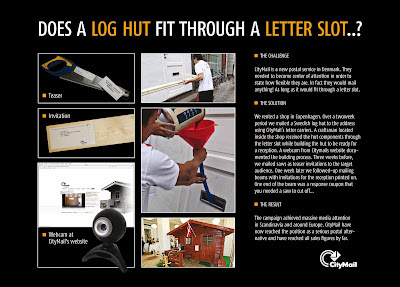