On 18 may 2007 a gorilla named Bokito escaped from Rotterdam Zoo. During his escape the animal attacked a female visitor. The woman had visited Bokito four days a week and during her visits had she frequent eye contact with the animal. This presumably led to the attack, since gorillas do not like direct eye contact. Sufficient reason, then, for a preventive solution by health care insurer FBTO. In its communications, FBTO always offers simple solutions. As it did in the present context. The weeekend after the escape they distibuted more than 2000 so-called Bokito Viewers at the entrance to Rotterdam Zoo. Simple cardboard spectacles, all printed with an averted gaze on the outside, enabling visitors to look at apes and monkeys without Bokito ever having to feel threatened again. More than 125,000 Euro worth of national and international media attention on radio, television, various daily newspapers, online newschannels and home-made clips on YouTube. In addition, the Bokito Viewer produced around 26,000 Google hits at the time. Silver Eurobest Winner 2007. 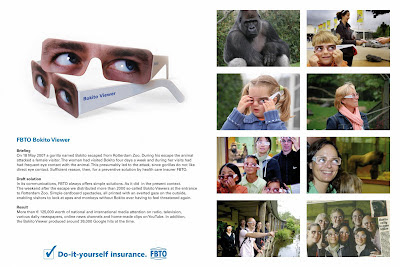