When will the Middle Ages be over?

Torture excesses in US military prisons and considerations on legalising torture. Reasons enough to launch a campaign against his medieval form of force. Real images from Abu Ghraib and Guantanamo Bay were illustrated in the style of medieval engravings. These pages were displayed in torture museums. It was clear to visitors - surrounded by cruel torture equipment - that torture is no relic of the past. It is real and going on before our eyes. Visits to the Amnesty International homepage rose by 20%. the downloadable "Stop torture" PDF brochure was downloaded three times more often than before. Applications to join the local Amnesty International groups doubled. 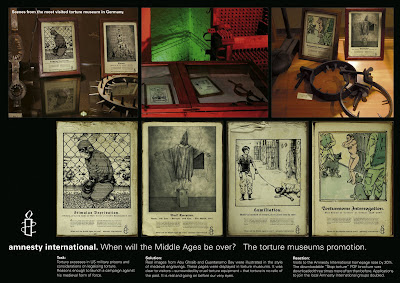