Establish the video portal YouTube beyond the YouTube community of users and increase the potential audience. Turn football fans into YouTube stars. During the 23 days of the EURO 2008 football championships, YouTube launched a fan diary on its platform. Football fans were encouraged to film their EURO 2008 experiences and upload them to YouTube. The German film director Detlev Buck used the video contributions to produce a feature-length film for the cinema. The film celebrated its opening in Berlin and Hamburg and went on general release in the cinemas in 10 German cities. Not just the world’s first user-generated film for cinema, but the longest ad ever. From online to offline right to the big screen. The promotion exceeded the technical scope of the Internet. And turned users into protagonists – and several of them into celluloid heroes. More than 2,100 people from 16 countries took part and sent in film clips. Millions visited the YouTube site. Thousands saw the film in the cinema. Coverage on TV, radio, in the press and on the Internet proliferated the message. 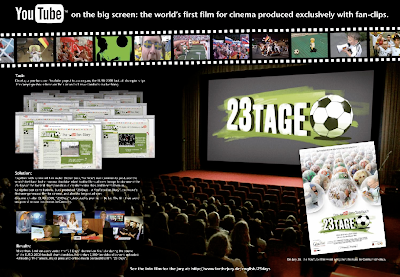