Every year during the monsoon season. Thailand is hit by outbreaks of dengue fever. During this time of the year, the Thai Red Cross usually has its big annual donation campaign. In 2008, SC Johnson (Thailand) co-promotes with the Thai Red Cross Society in its annual blood donation campaign with the emphasis to eradicate the dengue fever. SC Johnson sees a great opportunity at this to encourage trail usage of OFF! in conjunction with the Thai Red Cross campaign through product sampling across the infested regions of Thailand. A product sampling piece was created to dramatically and effectively demonstrate the need to give blood but to the right party! (to those people in need instead of the dengue carrying mosquitoes!) On the blood bag was a bold headline that reads: Give Blood To Those Who Deserve It. Inside the blood bag there is a sampling sachet of OFF! This sampling piece is given out at street corners, handed out at blood donations points, and also mailed to previous blood donors nationwide. Also other medium to reach target audience with posters, ambient and stickers. The results from this co-operation saw around 30% of blood donors were aware and influenced by the OFF sample piece (3.78 out of 5 point-scale, in intention to participate in this activity) Also with this co-promotion, the over-all number of blood donors increased by 20% from the previous year. 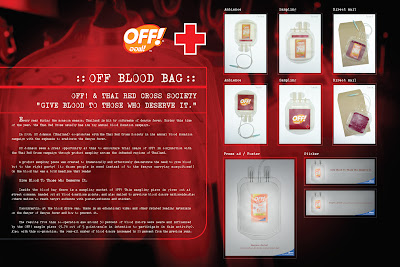 Posted by Marc van Wageningen at 9:41 AM