McDonald’s "Sort your head out"

Sweden is the second largest coffee consuming country in the world per capita, second only to Finland. Swedes need their coffee to stay alert and function normally as human beings. Much in the same way an Englishman needs a good cup of tea! This insight was the foundation of the media solution, an outdoor site turned into a huge push puzzle. Consumers and passers by could solve the puzzle in order to ”sort someone’s head out” and at the same time check they were also of sound mind! In the year McDonald’s have sold around 90 million cups of coffee nationwide, with an estimated income of 97 million Swedish crowns. That’s around 9.7 million Euros. 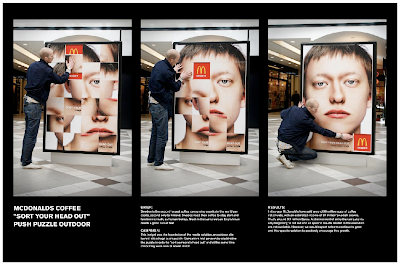