A result of modern forest clearing technology: In the tropical rainforests, 3 animal and plant species are made extinct every 60 minutes. The OroVerde foundation fights against the death of species and urgently needs financial support in the form of donations. Due to this irritation, they can raise the awareness for the great danger for the tropical animal and plant species caused by the systematic destruction of the tropical rainforest. And they clearly show how important it is to become active as a donator. They sent a wall chart to school principals, politicians and corporate decision-makers. The design of this wall chart is reminiscent of one's schooldays. However, the viewer is confronted with a completely unexpected form of diversity of tropical species: Instead of animals, a wide array of forest clearing machinery is depicted. The clickrates on the OroVerde homepage were 24 % higher than in the previous months. Donations raised about 5% compared to the previous year. Huge demand on further information material. 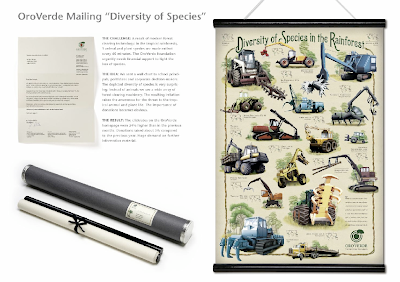