How everyone got talking about a new cooking school. The goal was to publicize a new cooking school in Zurich called Hiltl. The challenge was that the launch took place in mid-summer. This is a time of year when the target audience is outdoors until late in the evening. For this reason, the fountains in the most popular squares in and around Zurich were used as advertising media. The fountains were turned into huge woks, frying pans and soup dishes with wooden ladles up to 6 meters in length and plenty of dry ice. The message was placed directly on these, complete with the website address for more information and registration. The main target audience comprised young urbanites from Zurich and surrounding areas interested in learning to cook. This target audience is hard to reach with traditional media like TV or radio in mid-summer as they spend so much of their life outdoors. The new cooking school quickly became a talking point in the city. It was fully booked for 12 weeks after the campaign. Newspapers, magazines and radio stations reported on the unconventional media strategy and multiplied the advertising effect. 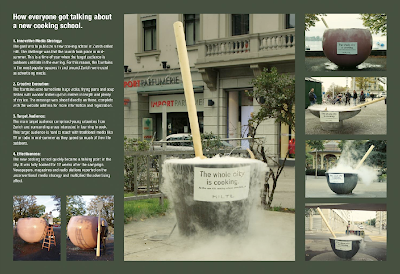 Posted by Marc van Wageningen at 11:48 AM