An offline campaign for online shopping: Gigantic fictitious construction projects shock Switzerland. www.ricardo.ch is the biggest platform for online shopping in Switzerland. A survey has revealed that the target group substantially underestimates the size and diversity of the product range. This campaign aimed to change that. What if the countless shopping offers from www.ricardo.ch were not sold over the internet? Then giant new shopping centres would have to be built in tiny Switzerland. So fictitious construction projects for real “Ricardo” shopping centres were announced. On official-looking information panels and giant posters on existing scaffolding. A baseline told concerned citizens to click through to www.ricardo.ch for further information. Switzerland is one of the most populated areas in the world. So any new construction project announced – especially when as huge as theirs – is followed with enormous attention. The click-through rate on www.ricardo.ch rose rapidly during the promotion: +657%. There worried citizens learned: the biggest shopping centre in Switzerland fortunately still only exists on the internet. And they could start shopping online right away. Several newspapers reported on the “Ricardo” construction projects, which multiplied the advertising impact. 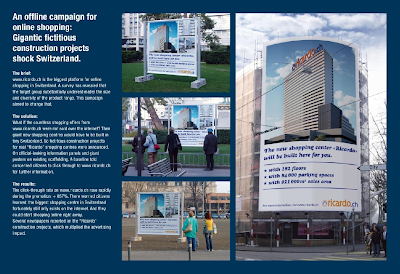