Turn the wellknown Axe effect into a live stunt. Every year Europe's largest womens running event takes place in Aarhus, Denmark. This year more than 6.000 women paticipated in the race and an enourmous crowd along the roads was following the event. Immediatly after the race begins, a man in an AXE T-shirt jumps over the fence approximately 100 meters after the starting line. He begins to spray himself with AXE deodorant and start to run along the route, when the 6.000 women gets near him. From the point of view of the spectators along the road, they saw a man - wearing an AXE T-shirt - that was being hunted by over 6.000 woman. By the way, this year the time record was broken by over 1 minute. 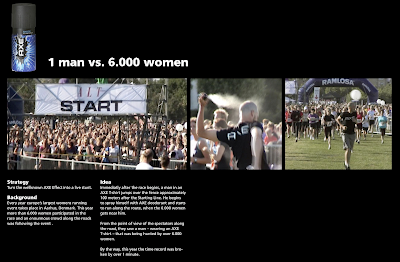